Yesterday, Saturday the 14th of March Flor and I hit the road to Vegas for the 2009 USBC Open Championships. This tournament is the biggest tournament of virtually any sport. This year it lasts from February though July and and there’s around 60,000 participants. Crazy! Anyway, I’m not going to post much but I’ll say that Vegas does not look empty despite the slow economy and the few people looking to drop tons of cash. It’s pretty busy here… of course it was Saturday night. Tonight however is a school night and everybody has to be back to their live tomorrow, that is everybody that doesn’t have the week off next week like we do. 🙂 We’ll see what things are like tonight.

Regarding the tournament I started off with the team event last evening and unfortunately I didn’t do what I had hoped to do. I started out with 157, 171, and 190 for a 518 series. Now, this is very tough condition but come on; I should do better than that and I have done much better than that in the past. I ended up losing all my money in brackets too which was a little disappointing because I had hoped to finance a nice show tonight on my winnings last night. I guess we’ll just hit up dinner and catch some cheap thrills tonight after bowling.

Speaking of bowling, I bowl Doubles and Singles in about 1:45 min so I had better get ready. Scores, video, and pictures will follow in another post. Happy day two of vacation! But before I go here’s a little tour of our room here at Caesars Palace; it’s pretty nice.

UPDATE 4/10/2009: I have added to the bottom of this post commentary on Day 2 of this event. I also included my entire tournament’s score sheet as well as video from all three events. 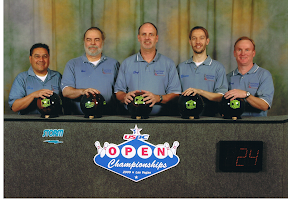 It’s been a couple weeks now since my time at the tournament ended so I figured it’s about time I document day two. 🙂 Sunday the 15th Flor and I lounged around the hotel all day long. I even blogged about day one that afternoon. The pool was nice though we didn’t get it… about half of the pools actually were under construction. Lunch however was awesome! We ate noodles at this new Japanese Noodle Bar in the casino of Caesar’s Palace.

Eventually we made our way back to the room and we got ready for another day of bowling. This time it was the Doubles event followed by the Singles event. My Doubles partner was Mike Stewart. I was a little nervous going in because I bowled pretty bad with him last year and I wanted to do better. After shooting poorly the night before I thought it might be a challenge. This time it was not however. Our lane was pretty tight but I had better late reaction off the break point than I had the first night and I was able to do much better over all. Of course my Doubles set was my best of all three, naturally the one I was most nervous about I was best in. I shot a 195, 215, 247 for a 657 series.

The Singles set unfortunately I lost my shot. We had to switch lanes for this set, as did everybody, and it took me way too long to line myself up after the move. After eventually doing it I was not able to carry and at one point I believe I had something like eight straight nine counts. I could have been much better than I was but I feel I bowled better than I did the night before despite only out scoring myself by 10 pins. I shot 148, 178, 202 for a 528 series. This brought my nine game pin fall to 1703; the worst I’ve ever done at Nationals. Not only that but my poor first games in both Singles and Team events dropped me out of most all brackets and I ended up losing money at this tournament for the first time… ohh well, I guess you can’t always be good.

Anyway, after bowling Flor and I went out to collect my meager winnings in brackets at Binions Casino and then hit the town in effort to forget our pain. Actually it wasn’t that bad; we had a nice late dinner and then went back to the hotel and made ourselves some drinks and watched the first three episodes CBS’s The Amazing Race on the laptop. It was a fine day spent on the lanes and with my lady. I’ve embedded below my score sheet for the tournament followed by video of my bowling for both Saturday and Sunday. My recap of the last couple USBC Open’s can be found by clicking through: 2008 USBC Open Championships and the 2007 USBC Open Championships.

Regarding Team Event Bowling: You’ll notice in the above video that my tendency for all three games was to tug it inside because if I didn’t it wouldn’t finish aggressively on the back end. For reference the first two games I threw a Brunswick Fury Pearl and Twisted Fury; the third game I tossed an old Buzzsaw. As you watch the video you’ll see my problem by noting all the 3-pins I leave followed by the occasional 2-pin or washout. The shots where I left 2-pins were the ones where I generally liked the ball out of my hand the best… the ball just didn’t finish down lane, which is why I tried moving more inside or slowing down. Eventually the third game I switched balls to an old Buzzsaw and had a bit more late lane reaction but it wasn’t enough for me to find any significant carry. That was my best game with a 190. Of all three games I missed one non-split/washout spare. I was solid; I just couldn’t hit the pocket with drive.

Regarding Doubles Event Bowling: The Doubles event was by far my best of the three sets. Between day 1 and 2 I had the on-site Brunswick staff tweak my finger holes on my Fury Pearl so that it fit me better. The poor fit was getting into my head a bit too much during Team competition; I shouldn’t have let it bother but I did anyway, shrug. After the fix my mind was more at ease in the Doubles event as I was a bit more comfortable with my grip. This was fortunate because the team that bowled on the par ahead of us broker down the a lot more than our team did the night before. The break point down lane was very defined and I was able to keep my speed up without sailing through it. I also was fortunate enough to not have to manufacture hook; I just let the ball come off my hand clean. I’m sure this helped with my accuracy. Anyway; this set saw a couple bad shots by me. I missed a spare or two and threw a couple untimely washouts but overall I was quite please with my results. I shot 195, 215, 247 for a 657 series. My partner Mike ended up shooting about minus 40-50 or so and we ended up over 1200 for the set; easily enough to cash. It was a lot of fun. Watching the video you’ll notice that after a while I eventually switched balls from the Fury Peal to the Twisted Fury. This was because I felt the back end was starting to hook just a pinch early though I was still hitting pocket. Wanting to stay ahead of the transition I made the switch as the Twisted pushes further through the oil before reacting to the down lane friction. This allowed me to maintain my trajectory and conserve energy for the pocket rather than let it burn up early in the heads. Generally speaking though; I was lucky to bowl on this pair because it was broken down when we arrived and I didn’t have to think; I just naturally matched up with it well to my good fortune. Unfortunately the angle of the video is a bit off to the side so it’s tough to see where I was playing. I was generally at about 27 at the foul line with a break point around 9 at 45′.

Regarding Singles Event Bowling: It’s hard to tell from the angle of the video but you should notice that I am playing a little deeper inside. This is because the Singles event is the 7th through 9th games played on the pattern and by this point it’s a little broken down and there is more friction in the heads. This of course means that though you have to move inside to get the ball to push down lane but you still need quite a bit of down lane reaction to turn the corner and carry the corner pins… or hit the two out of the rack for that matter. In the Doubles event the break point was a little more broken down and the break point down lane allowed a more aggressive move into the pocket; the singles pair I bowled on however had a weak break point and it took me too long to adjust to it. I kept wanting to throw my Fury Pearl which was more aggressive to get the late drive into the pocket. My 148 game should have shown this was not working. I eventually settled on my Twisted Fury and added a pinch more speed. I moved my feet a couple boards right and my target break point a couple boards inside and increased my speed and was finally rewarded with a consistent shot that carried. I was able to use this shot to limit the damage in game two with a 178 and then finally eek out a 202 in game three as I refined the shot. Unfortunately the 148 in game one killed my chances at getting anything in the brackets or the over all singles standings. I did bettered my Team event scores… so at least I’ve got that going for me. For Day 2 I was a combined -15 for 6 games… quite average if you ask me. I should have adjusted faster. Ohh well, there’s always next year.

In case you’re curious for more bowling info you can check out my tournament archive and/or my career bowling stats page.